York, PA - Do not miss Keystone State Boychoir (KSB) when it brings the house down this Friday at the American Choral Directors Association of Pennsylvania’s (ACDA-PA) Fall Choral Conference. KSB has been invited to take the stage as the opening performance at the prestigious ACDA-PA conference in an open-to-the-public concert at Zion United Methodist Church in York on Friday, October 19 at 8 pm. Tickets can be purchased at the door for $15.

Of course, no boychoir tour to York would be complete without a visit to nearby Hershey Park. The boys are excited to eat chocolate and ride roller coasters almost as much as they are excited to sing for the conference attendees.

Approximately 60 selected members of KSB will travel to York for the weekend. KSB member Konstantin Minch, who is 15 years old, says, “Whether it’s Antarctica or a little closer to home like York, traveling with KSB is always a great time. We rehearse, perform and have a lot of fun together. After concerts, people from the audience shake our hands and sometimes hug us because they enjoyed the concert so much. This tour, we get to go on roller coasters and eat chocolate! The penguins in Antarctica were cool, but rides are better.”

Audiences are always moved by KSB’s angelic sound, as well as the boys compelling stage presence. Known as “Pennsylvania’s Boychoir,” KSB has garnered unprecedented success since its inception in 2001 and is considered to be one of the finest community-based boychoirs in the world. KSB has 170 members who range in age from 8 to 18 and come from a range of backgrounds and counties in Pennsylvania including Delaware, Bucks, Montgomery and Philadelphia counties.

Under the direction of Joseph P. Fitzmartin and Steven Fisher, KSB has sung to full houses locally and abroad, from local retirement centers, to the Kimmel Center, to concert halls in Vietnam, Australia and Brazil. This Spring KSB made its debut on Broadway in "Oliver!" with Tony-Award winner Brian Stokes Mitchell. KSB is the only choir to have sung on all seven continents. It made history in 2009 as the first choir to travel to, and perform in, Antarctica. This summer, KSB sang at a ceremony in Oslo, Norway for Nobel Peace Prize winner Aung San Suu Kyi and presented her with a Liberty Bell. It also sang in the northernmost town in the world in Svalbard, Norway. Having sung at both poles now, KSB has been deemed the “boychoir with latitude attitude.”

The conference next week for the ACDA-PA brings together singers, composers and conductors who share their choral talents in a weekend of events. The ACDA is a non-profit that represents 18,000 choral directors and more than a million singers in the United States whose goal is to bring excellence in choral music through performance, composition, research and teaching. 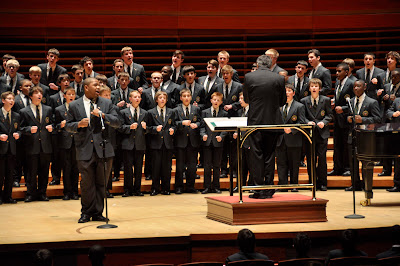